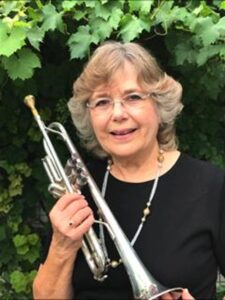 Carole Dawn Reinhart is recognized as one of the world’s outstanding trumpet soloists, acclaimed not only for her technical ability, but also for tone quality and interpretation.

A Christmas “carol” born at “dawn”, she received her first instruction at age 2 1/2 on a slide cornet from her mother, a trombonist. Already at 7, Carole was playing duets in concerts with her older brother, who was an accomplished cornetist. She received a scholarship to the Juilliard School of Music in New York when she was 10.

At age16, commissioned as the youngest and only woman bandmaster in the Salvation Army, she made her first international appearance as guest soloist and conductor in Toronto, and at age 19, she was guest soloist with the ISB on tour in England.

Along with playing in the orchestra at Radio City Music Hall in New York and in Leopold Stokowski’s American Symphony Orchestra, Carole continued solo appearances with bands and orchestras and on numerous TV shows.

In 1971, Carole moved to Berlin, Germany to build her solo career (ca. 125 concerts a year). She recorded for Deutsche Grammophon and BASF with the Munich Philharmonic, German Bach Soloists, Amsterdam Chamber Orchestra and Wuerttemberg Chamber Orchestra, along with numerous radio recordings. Her concert tours have taken her throughout Europe, the Orient, Middle East, South Africa, the United States, Canada and Australia, where she played Haydn’s “Concerto” with the Australian Symphony in Melbourne at a live-telecast open air concert with an audience of over 100,000. In 1976, she was soloist for the National Brass Band Championships in Royal Albert Hall.

In 1983, Carole was offered a professorship at University of Music in Vienna, and in 1994, the Vienna University Press published the book, “Carole Dawn REINHART” – Aspects of a Career”. An updated version of that book was released in 2002.

Carole earned her Ph.D. in 2009 and has received the “Pioneer Award” from the International Women’s Brass Conference, the “Austrian Cross of Honor for Art and Science”, and the International Trumpet Guild’s “Award of Merit”.

Although Carole ended her solo concert performances, she continues to be active teaching at the university, giving master classes around the world, and as a juror for solo competitions. Her desire is to inspire and encourage young musicians in fulfilling their dreams as she has been blessed in more than fulfilling her own.